Web Designers: Wake Up And Smell The Touchscreen Coffee!

This is your very, very early wake-up call:

Touchscreens are coming to the Mac.

There will be one later this year.

What are you going to do about that?

Are you going to keep designing sites that look like Microsoft-inspired abominations, with long scrolls, multiple columns, and continue to use Search as a crutch?

Scrolling is an outdated legacy method from the time of CRTs and character-based interfaces. Scrolling has no place on a touchscreen when it pertains to reading, period.

I had intended to do a long post about screen design, but this blog dies later today and the subject is too big to get in during these final hours. So this will be akin to Fermat’s marginal note.

However, let me just point out one example of atrocious legacy design. It’s the Time magazine app for the iPhone. It’s a total mess! 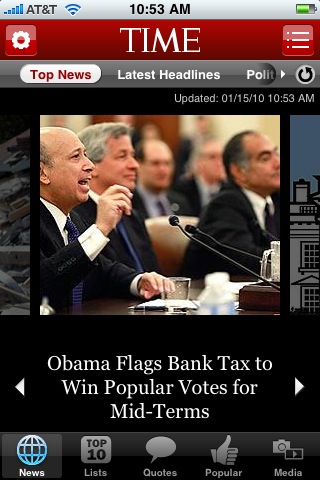 They are so married to the print paradigm that they’ll sink to looking like an amateur publication by inserting a crappy graphic of the White House! Really, what do the photos add? Nothing! All of the contents can be one or perhaps two screens, period. Contents should be immediate, not hidden by scrolling.

It gets worse when an article is opened: 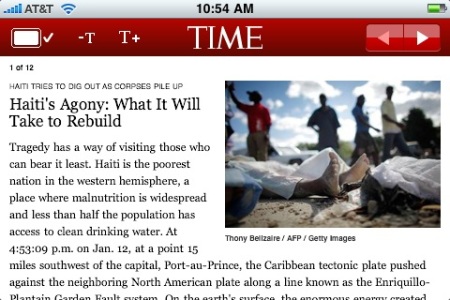 It gets worse when the typeface is bumped up in size:

Because the scroll not only gets longer, but the overall effect is like having to pause and read line-by-line with one’s finger. As I used to do when I was in the early years of elementary school. Who wants that?!

The Editis video has demonstrated that use of white margins can preserve a screenful of content while also permitting typeface enlargement:

People read for information and for relaxation. In both instances, this means upfront they want to do the least amount of effort to read. Tapping — with a fingertip — will always win over scrolling. Always. Scrolling breaks concentration. Scrolling also screws up memory. Go read a long post that scrolls. Can you recall exactly where in that long scroll something is? No. (If you say “I can use the Find function,” you are FAIL. See Search, above.) But everyone can roughly recall where something is in a book. Because the information has been assembled into a format that takes the least amount of effort to access. It’s been broken into chunks.

I don’t care if you hate the iPhone, the iPad, and the Mac. These are the devices over a hundred million people will have — and that number will grow. And everyone out there has been imitating was Apple has pioneered — so add those touchscreen devices too and the future is inevitable: it’s touch.

Everything on the Internet will have to be rethought and redesigned to take advantage of that fact.

And if you’re a WordPress template designer, start work today. Because the first templates that successfully capture the essence of this — the fine details and every question answered aren’t required from the start — will win big. That designer will have a place in history for making the first step that others will follow and build on.

Will that designer be you?

Final note: Yes. I’ve seen the videos from Wired, Sports Illustrated, and Berg/Bonnier. Each one is wrong in its own way. That’s what my original long post was going to do: dissect the wrongness of those. Don’t bother pointing those out to me in Comments. But do point out any site you see that’s already thinking along the ideas in this post.

This entry was posted on Sunday, January 31st, 2010 at 1:57 pm and is filed under Apple, iPhone/iPod Touch, MiniTablet. You can follow any responses to this entry through the RSS 2.0 feed. You can leave a response, or trackback from your own site.

3 Responses to Web Designers: Wake Up And Smell The Touchscreen Coffee!