I wasn’t away from all of it. I’ve been doing a new blog dedicated to the upcoming Palm Pre smartphone and stayed on that Twitter account.

My @mikecane Twitter account is primarily for eBooks, writing, books, and that sort of thing — with sprinklings of miscellaneous tech and Doom.

What I discovered, thinking about why I didn’t miss that Twitter account, is that I’ve come to entirely despise the entire eBook landscape.

Traditional print publishers are being even more intransigent than the RIAA. They clutch their pearls as the ship shinks and the water level begins to rise above their necks. There’s only so much you can do with such helpless idiots. I’ve yelled myself hoarse. I’ve been one in a long line of people yelling themselves hoarse. The yelling continues to this very day.

I’ve had enough of that aggravation.

I’m bowing out of it all until it’s all sorted out.

They basically have two choices: Change Fast or Drop Dead.

Either one is fine with me.

Oh, I did that headline to spin his head a little bit.

He does not fetishize his Kindle.

But he does love it and strikes back at the anti-eBook people with his post:

In Defense of the Kindle

This point I liked:

But I believe it’s worth noting as a pre-requisite for Kindle discussion that people who fetishize books as books are just that — fetishists.

Oh, he made other good points, but the weird love of paper gets under my skin too.

One thing Rogers wrote, however, I cannot allow to go unchallenged. This:

The DRM is indeed evil, if you ever want to transfer those books to another mass-market reader. Of which there are none.

I detest the Kindle. Let me spell out why again:

1) You can buy only from the Amazon Kindle eBook Store. Can you say monopoly and restraint of trade? (Yes, I do have the same issue with the iPhone App Store, so STFU.)

2) Because Amazon has a distribution monopoly, it can act contrary to the interests of both publishers and readers. Like a — say it with me — monopoly.

3) Amazon owns MobiPocket. Amazon screwed all of their MobiPocket customers by tweaking that file format for the Kindle. Anyone who invested in DRMed MobiPocket eBooks over the past five-plus years has to buy them again for the Kindle.

4) The Kindle cannot do ePub files. Again: the book publishing industry has finally settled on a standard to foster a mass-market: that’s ePub. Amazon could have included ePub support in the Kindle 2. Amazon instead chose to still ignore the existence of ePub.

5) The Kindle cannot borrow eBooks from any public library. Note that among the eBook file formats offered by public libraries, a vast selection are in Amazon’s own MobiPocket format! So the Kindle screws customers twice here!

6) Amazon grabs a thieving 65% of the sale price of an eBook. Robber baron, anyone?

Don’t tout the wireless feature of the Kindle. Really, have you no ability to delay your gratification? The iPhone can also grab eBooks wirelessly (and will soon do ePub too!). The Sony Reader will have wireless at some point (probably this year) — and it will allow people to buy from any eBook store, not restricting them to Sony’s own store.

John Rogers is an executive producer and co-creator of one of the best new series on TV: Leverage. Don’t hold his Kindle love against him. Watch the show!

Heavy Iron At Tools Of Change

I can’t imagine a life spent on the lecture circuit talking about a brief shining moment and selling T-shirts.

A great summary of some points from the Tools of Change conference.

Wow, there were several gallons of snake oil being peddled! It made me very cranky and I tweeted back (not being there in person) my displeasure. Some more posts about that later.

An unofficial — yet surprisingly public — statement was made by an alleged Sony representative in the audience of a seminar at the Tools of Change conference today:

Unfortunately, only one person caught that and I couldn’t get the identity of the speaker, who walked out after stating that.

Given what’s happening with both the Stanza eBook reader as well as the abominable Kindle 2, Sony must be feeling some real pressure.

A surprising revelation about the Stanza eBook reader for iPhone, via Twitter:

This, however, has not yet been publicly announced. You’re getting it here first (or at least very early!).

What Lexcycle formally announced is itself a big eBook bombshell:

NEW YORK, Feb 11, 2009 /PRNewswire via COMTEX/ — Lexcycle, the company behind the award-winning Stanza electronic book reader for the iPhone and iPod Touch, announced that it has entered into a definitive agreement with Adobe(R) to license PDF and EPUB rendering technologies as well as support for Adobe’s eBook content protection technology. The integrated technology will allow Stanza users to enjoy eBooks sold or loaned by any retailer or library, who distribute eBooks protected with Adobe Content Server 4.

Starting next quarter, Stanza will be able to read EPUB and PDF files secured with Adobe’s content protection technology from Adobe Content Server 4. The EPUB format has gained significant traction among major trade book publishers and industry groups such as the Association of American Publishers (AAP). With the upgrade, Stanza users will be able to purchase or borrow Adobe eBooks from the hundreds of retailers, academic and public libraries who distribute Adobe eBooks worldwide.

That is simply astounding! Suddenly there will be over 1.3 million devices out there that can borrow ePub eBooks from public libraries. And purchase them from any eBook store that offers Adobe-wrapped DRMed ePub (which, right now, is most of them).

Stanza eBook reader suddenly becomes a competitor to the Sony Reader — and simply trumps the Kindle 2 (which cannot do ePub).

And this is very, very enticing:

JavaScript is one of the programming tools used to develop for the Palm Pre. Can Lexcycle have actually hinted that the Pre is their next target device?

This was a cruel but necessary experiment. Don’t bother reading further until you’ve seen this post.

This has now been updated for a FIFTH time now. Read thoroughly. Heed the red part.

A noxious side-effect of not having a general-purpose blog is that I must hijack this blog for a post such as this.

These are my Guidelines:

1) You are a so-called “A-Lister.” I’ve Blocked Scoble, Rivera, and others. I don’t want you Following me. Piss off.

1a) If your description has the term “coach” in it — life coach, writing coach, social media coach — you get Blocked.

2) You Follow more than 1,000. Really, what is up with that? I’ve Blocked someone who was Following forty-two thousand. That’s not having a conversation! That’s performing espionage on a small town!

3) I make an exception to rule 2 if you are involved in books: writer, editor, and even the marketing thereof. But if your Profile makes no mention of that, you get Blocked.

3a) If you write for children, you do not want to Follow me. I use what is sometimes whiningly referred to as Objectionable Language and you don’t want that kind of influence to seep into your books. Besides, children are best killed, cooked, and fed to dogs.

5) You get Blocked if your Twitter Profile URL goes to an ad.

6) You get Blocked if the only person you Follow is me. That creeps me out, OK?

7) I sometimes drop people I Follow, too, if they never reply to tweets I send to them. Why should I read you if you won’t read me?

7a) If your Twitterstream has a lot of timed repeats, you get UnFollowed if I was Following you.

8) I will now Block people who Follow me whose updates are protected. I used to be lenient about this, but no longer.

9) I WILL BLOCK YOU IF YOU PUT ME IN A FOLLOW FRIDAY LIST OR ANY OTHER LIST — INCLUDING TWITTER’S NEW LIST FUNCTION. I vet my Followers to allow only relevant people and to keep my Follower count honest. Vetting takes time. Do not waste my time with stupid gang recommendations.

On March 23, I was alerted to the existence of this article and its damning conclusions: Online Monoculture and the End of the Niche. I feel that push towards what is termed “monopoly populism” and see evidence even in “people-selected” aggregator sites (which are just about uniformly as crooked as the mortgage lending system has been). Since I am hardly what anyone would term mainstream or populist, I think I need to do my bit to combat this. Thus, I am lifting my Twitter Follower limit.

If you have been Blocked in the past, email me (mikecane02 -at- yahoo.com) to see about it getting rescinded. But note that rules 1, 2, 3a, 4, 5, and 6 will remain in effect. No second chance for you!

If you are a book publisher, you do not have to keep Following me. Pop up as a Follower so I can be made aware of your Twitter presence. If I’m not Following you within seven days, you can UnFollow me.

And lastly, if you Follow me, don’t expect me to Follow you back unless your Twittersteam shows interesting tweets.

If you think I’ve Blocked you unfairly, send me an email with your Twitter ID.

Good. Now I can point people to this blog post from now on.

When Will Sony Wake Up?

Today saw the introduction of the abominable Kindle 2.

No ePub. And no SD card slot!

Yeah, how about that, Sony?

It was waaaay back on November 15th that I blogged about the Sony Publisher Portal.

I recommended that to several small press print publishers.

Not a single one of them has heard back from Sony.

What’s up with that, Sony?

While eager small presses — not to mention direct-publishing writers — wait for your train to enter the station, you lot are diddling around with fake mannequins to introduce the VAIO P flawed non-netbook netbook. A move that is eerily reminiscent of the decadent and degrading “human statues” seen in a lavish and inappropriate party in the documentary classic, Roger & Me.

Sony is bleeding out due to the economy, with massive budget cuts and layoffs.

Is the lack of response to applicants of the Publisher Portal indicative of Sony yet again pulling out of a market? The shadows of Betamax, digital audio tape, and the Sony CLIE still haunts.

Maude Newton re-tweeted a link to an article about Google making a mobile-friendly version of its Book Search writer-robbery site.

I went to have a look.

As some of you will already know, on and off I have been working to wrestle The People of the Abyss by Jack London into an ePub eBook.

Since I have become very familiar with London’s book, I zeroed it on that one to see what it looked like on the new mobile Google Book Search.

Just look at these screensnaps, with click to enlarge:

I squeezed the desktop Firefox window to simulate a cellphone screen. Pretty neat at first glance, eh? I thought for sure this would replace all the work I’ve been doing on my ePub edition. 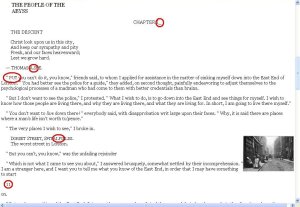 From the first word, it’s riddled with typos!

And it just goes on and on like that: 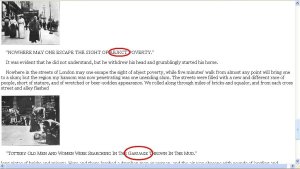 At first, I thought all they were doing was re-using the dreadful OCRed text. But something else is going on here. Something bizarre. Look at the OCRed text (click to enlarge):

The first word is correct and the other artifacts aren’t present!

So what is Google doing here?

But it’s sloppy, inexcusable, and tantamount to vandalizing historical texts.

I will continue with my ePub version.

Unlike Google, with its thousands of employees and billions of dollars in the bank, I care about the work of writers. My version won’t have typos.