A recording of yesterday’s 18-minute webcast discussing Disney Digital Books is now available for viewing via links on this page.

It requires Windows Media Player or RealPlayer for viewing.

I’d forgotten all about this until @alexmilway reminded me on Twitter.

John Kricfalusi, creator of the incredible Ren & Stimpy, has a blog.

It’s all right there.

Kricfalusi’s blog is not a blog.

It’s the chronicle of an ongoing crime.

Pay The Artist!
TV’s Bonanza: With Charles Dickens
He Did Not Back Down

why i am not afraid to take your money, by amanda fucking palmer

i am shameless, and fearless, when it comes to money and art.

i can’t help it: i come from a street performance background.
i stood almost motionless on a box in harvard square, painted white, relinquishing my fate and income to the goodwill and honor of the passers-by.

i spent years gradually building up a tolerance to the inbuilt shame that society puts on laying your hat/tipjar on the ground and asking the public to support your art.

i was harassed, jeered at, mocked, ignored, insulted, spit at, hated.
i was also applauded, appreciated, protected, loved….all by strangers passing me in the street.
people threw shit at me.
people also came up to me and told me that i’d changed their lives, brightened their day, made them cry.

some people used to yell “GET A FUCKING JOB” from their cars when they drove by me.
i, of course, could not yell back. i was a fucking statue, statues do not yell.

Go read this. Every single word. Bookmark it. Pass it on.

TV’s Bonanza: With Charles Dickens
He Did Not Back Down 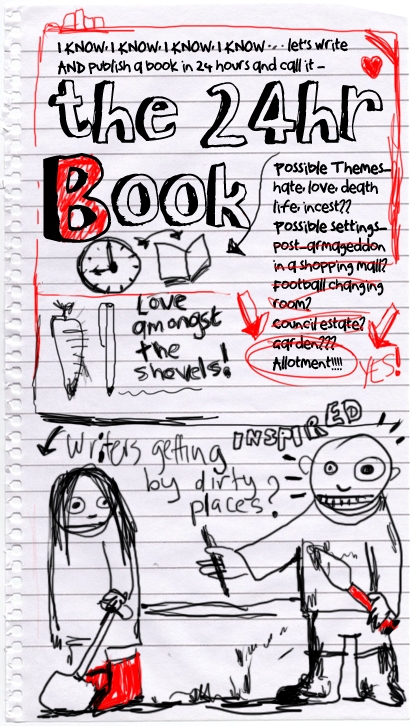 In collaboration with if:book, The Society of Young Publishers and CompletelyNovel.com, Spread the Word has commissioned The 24 Hour Book, a groundbreaking project to challenge a group of writers to write a new story about London in just 24 hours.

The project doesn’t excite me, but its web page does, hence this post.

Scroll down to see the FriendFeed widget, the Twitter widget, and the map.

I’ll have more to say about that in another post at another time.

Originally I was going to drop the term “eBook” from the title, but I think people who see links to this at other sites would get all confused.

Speaking to New York Times, Daniel Johnston said: “If they make it into a real video game, it might work out, I guess. I don’t even know what an iPhone is.”

“There’s a little bit of a ‘gate keeper’ thing with Nintendo which raises the bar very slightly because you’ve got to have dev kits, but that’s a good thing,” he said. “Look at iPhone; there are so many games that aren’t up to scratch, without being too negative about it. It’s very hard to find the good stuff amongst the rubbish.”

The third issue of “Mayhem,” which is downloadable from iTunes, is the first to go digital. It features an interactive version of a comic book with sound effects, page turns and even voiceover.

Boldface emphasis added by me.

CNN: Artist Jim Lee is very big in the comic book world. How did he get involved in this project?

Gibson: I found Jim Lee on Twitter … and we just kind of took it from there.

Manga version of Hitler’s ‘Mein Kampf’ a hit in Japan

The manga book describes both Hitler’s autobiography and his infamous Nazi manifesto in the unlikely form of easy-to-read comic pictures and captions.

Since it was published in Japan last November, its popularity has soared, with sales of more than 45,000.

More Metadata Problems in Google Books: Word Clouds
— I’ve been overdue in writing another metadata post, but this item is so important, I wanted it published now.

Back in August 2008, I posted October: The iPod Touchbook, in which I stated that Disney would be a factor in eBooks and in Apple’s tablet plans.

The pieces are now fitting together, with The New York Times announcing this morning: Disney Tries to Pull the Storybook Ritual Onto the Web.

In what it bills as an industry-defining moment — though rivals are sure to be skeptical about that — Disney Publishing plans to introduce a new subscription-based Web site. For $79.95 a year, families can access electronic replicas of hundreds of Disney books, from “Winnie the Pooh and Tigger Too” to “Hannah Montana: Crush-tastic!”

Bold emphasis added by me.

“The company feels that devices don’t offer a Disney-level experience for kids and families, and I agree with them,” Ms. Epps said.

Bold emphasis added by me.

Those are the words of a Forrester analyst, but they’re on-target.

Should children be expected to become interested in low-resolution grayscale imagery in a non-interactive and single-purpose eBook device such as a Sony Reader or a Kindle? What advantages would they offer over print? None for a child. And there’s no way flat ePub can compete with a videogame, a TV, the Internet, or even a full-color printed paper book.

How serious is Disney?

A huge marketing effort will set about drilling the site into the public consciousness. Three million promotional postcards will be distributed at screenings of Disney films, and a social media and advertising component is intended to reach 14 million mothers. In the works are demonstrations at Apple’s retail stores.

Boldface red emphasis by me.

The Disney site even offers a CoverFlow interface:

And make no mistake, even though no one outside of children’s publishing pays much attention to Disney as a publisher, they’re huge:

Now add Marvel to that!

Disney Digital Books had a webcast at 1PM ESDT today and I attended. Some screensnaps and salient points.

An introductory pre-roll video had some interesting hardware: 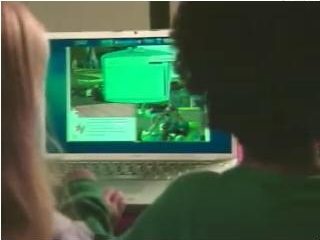 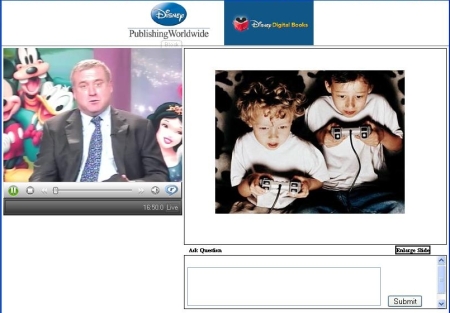 Russell Hampton, President, Disney Publishing Worldwide, illustrating and making the point that time once devoted to reading has been usurped by video game play. 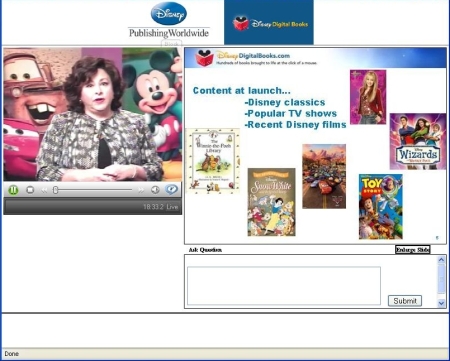 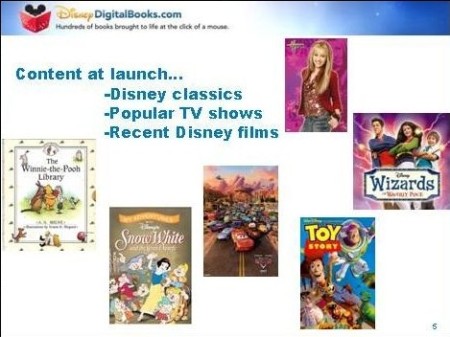 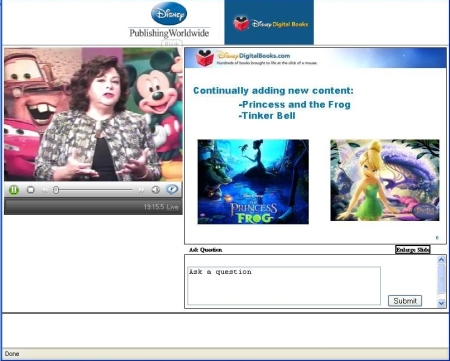 Disney emphasized that the site will be continually updated, especially with tie-ins to current movies and TV programs. This makes their site a library that constantly grows. 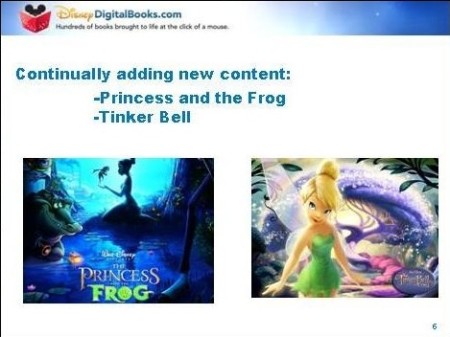 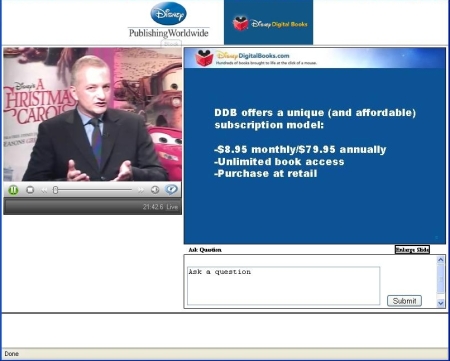 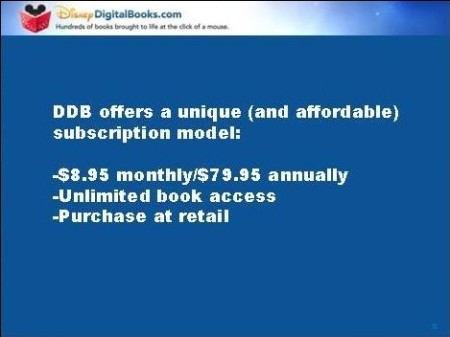 “Purchase at Retail” is a key factor: There will be gift cards. They’ve timed this to coincide with the year-end gift-giving season. Will these gift cards be sold at Apple Stores too? I expect so!

Mention was made of the Kindle. They’re already on that, with some books geared to teens. But the monochrome screen is not appealing to the age group they’re targeting with this site. As other hardware platforms appear, they plan to be on them. It was stated somewhat oddly that they’d never be “exclusive to one platform.” It was emphasized this was browser-based. Of course, that’s now. In a year or two, I’d expect downloads from them.

What I found interesting was the amount of testing that went into the books. A suggestion from parents was that kids should be able to “play” with the books. Also of interest is that the entire site was developed in-house with “proprietary” technology. I can’t help wondering how related this might be to the goals — and technology — of Apple’s new iTunes LP.

What I find to be harbinger of the future is this aspect: 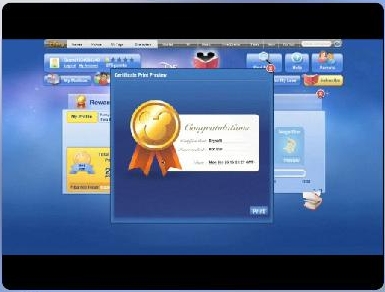 I see that as the future of textbooks and schooling. Reading material will offering progressive testing. A student will read a chapter and take a quiz. If that quiz is failed, the chapter must be re-read and the test taken again (perhaps even a variation on the first test!). This has vast potential impact, especially with those who choose to do home-schooling. Is the future of the classroom basically come in, read, and be tested? The dynamic electronic book envisioned by Neal Stephenson in The Diamond Age — and earlier by Alan Kay with the Dynabook — comes closer to being real.

Where does Marvel come in? It addresses a group Disney was missing: boys.

“This helps give Disney more important exposure to the young male demographic that they have sort of lost some ground with in recent years,” said David Joyce at Miller Tabak & Co.

Disney has long been a blockbuster brand with girls, thanks to characters such as Hannah Montana, Cinderella and Snow White, but has struggled to achieve the same kind of success with boys.

There are already comic books by others for sale in the App Store. Expect Marvel to shake that up in the future.

I’ve already read carping on the Net that this is a cynical Disney ploy to indoctrinate kids with their brand names. Well, look, it’s Disney Publishing. It makes no sense to me to gripe about that. Hold parents responsible for what goes into the heads of their children — and those parents had better be prepared to cave in to their kids’ demands for the latest Disney giveaway at McDonald’s despite their efforts. Disney is a safe brand for children, not a small thing in this world.

What I love about this is that Disney is emphasizing these are digital books — not eBooks. They’ve positioned themselves for the future, not settling for the inferior offerings of today.

A questioner asked what number of subscribers they would consider a success. Disney’s not thinking that way. This is a long-term investment for them. I’d like to see the calculations that went into this. On one side, Disney’s subscriber projections, a curve upward; on the other side, the price of portable full-color wireless tablets, with a curve downward. Remember: the iPhone debuted with a US$600 price tag. You can now buy a near-iPhone, the iPod Touch, for one-third of that price.

Unfortunately, my question about demonstrations taking place at Apple Stores didn’t get through due to time constraints. It will be interesting to see how these are done. The larger Apple Stores I’ve been to all have a section reserved for the use of children.

So there’s Disney + Pixar + Marvel with a massive stockpile of content and Apple + iTablet with the hardware and iTunes gateway. This combination is going to change the world and move us into the age of the smart digital book.

Oh boy. Hanwang is a company that seems to create a new eBook device every month.

First some screensnaps, then the video: 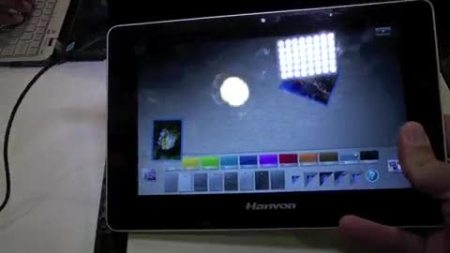 Notice the sealed back. I see no way to replace a battery. 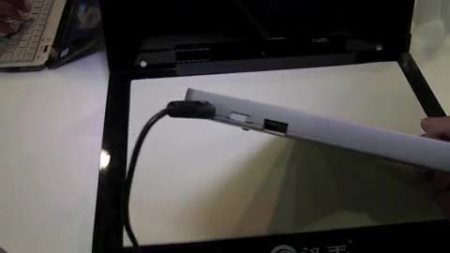 MultiTouch — don’t get excited, watch the lag on the video. 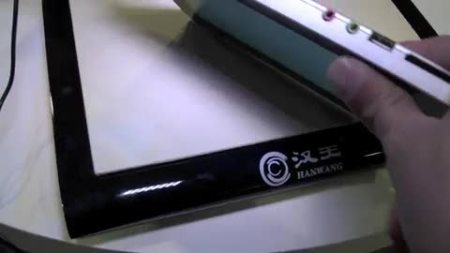 I’d like to get excited about this, but the price will be the thing. That and availability. At least it will be able to do eBooks via software: LIT via MS Reader, Mobi via MobiPocket Desktop, PDF via Adobe Reader/Adobe Digital Editions, etc. Although with an Atom processor, I’m not certain how successful any of that will be.

Booksquare on Twitter alerted me to Harlequin reprinting some classic works by writer James Hadley Chase.

Since he’s been generally out of print for so long, I’ve been able to read only two of his books, but I loved them. So I’ve been waiting and waiting for someone to get wise and bring him back.

Now Harlequin will be doing so — in paper and in eBook.

Just look at these covers!

Go see the rest in the Vintage series (which includes other writers)!

Ron Hogan alerted me to Jonathan Harris portraying Charles Dickens in an episode of TV’s Bonanza. A quick search later and some info:

136.) A Passion For Justice
September 29, 1963
Written by: Peter Packer
Directed by: Murray Golden

Charles Dickens visits Virginia City and is appalled to discover his work being reprinted without his permission by the local paper.

And this wonderful clip:

“I’ve poured my life into my work. And I have to fight for it.” 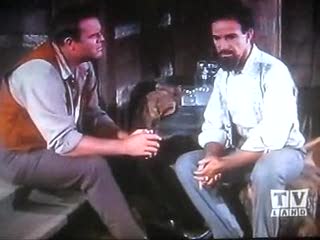 “They fail to realize how much a writer gives of himself. How much of his soul is locked into every word.”

There are two other clips: One, Two.

He Did Not Back Down