Tech news: For the smarter kind of bookworm

The budget version of the Asus ereader will be more in keeping with the Taiwanese company’s reputation for producing cut-price gadgets. Dubbed the Eee Reader, after Asus’s cheap-as-chips Eee PC netbook range, it is likely to take on the competition on price rather than features. The cheapest rival on the market is the Cool-er, which costs £189. Asus is thought to be aiming nearer the £100 mark.

There’s many things one can say about Asus, but none of them are what I’ve heard about the Cool-er. The Cool-er is fall-apart hardware from PVI that lives down to its bottom-feeder reputation. Asus EeePCs, on the other hand, have had generally stellar ratings all across the board.

According to president Jerry Shen, the Eee Reader will become the planet’s cheapest e-book reader, though a premium model could also be launched to satisfy those craving higher-end features — probably amenities like inbuilt 3G, a web browser and expandable storage.

Asus is also a company that dares to dream.

It pioneered netbooks, popularized them, churned out more of them in a shorter period of time than Sony did of PalmOS-based CLIEs, put MultiTouch in them, made them easily hackable, and created an entire new category of portable computing device.

They came out of nowhere and created an Apple-like earthquake in digital devices.

And now they are aiming at the eBook.

To say that the Amazon Kindle, Sony Reader, and all other eInk devices have just been sent to their doom is to state the obvious.

Here are a bunch of photos I’ve culled from the Net of a prototype eBook reader Asus recently displayed: 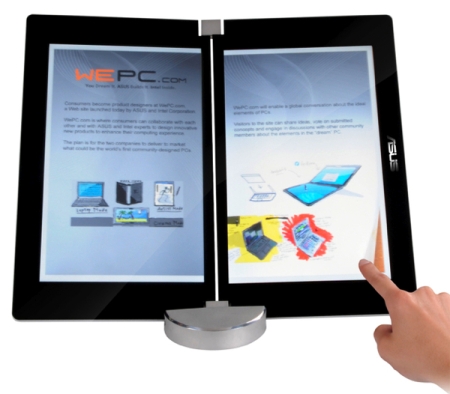 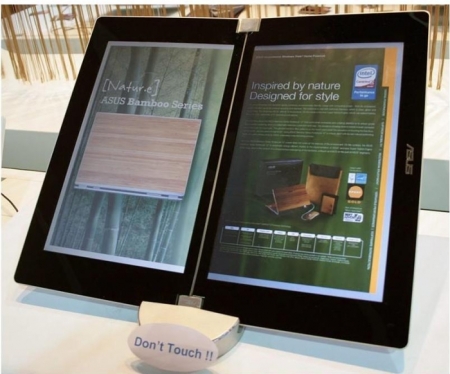 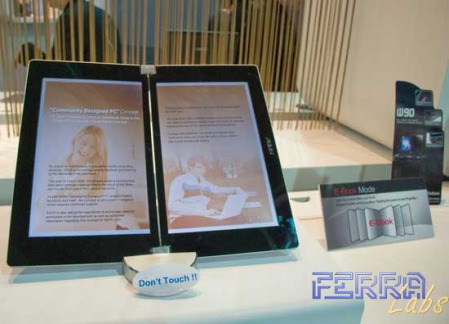 As for a screen, really, there is only one choice for Asus: Pixel Qi, which states on its website:

Our first screens will be 10″ diagonal screens for netbooks and ebook readers that are sampling now and will ship in high volume in late 2009. These screens rival the best epaper displays on the market today but in addition have video refresh and fully saturated color. The epaper mode has 3 times the resolution of the fully saturated color mode allowing for a high resolution reading experience without sacrifice to super color fidelity for graphics. In addition these screens can be used in sunlight. Look for them in the market in the second half of 2009.

This is a photo comparing the Pixel Qi screen in ePaper mode to the eInk display of the Amazon Kindle in outdoor sunlight:

It’s obvious the Pixel Qi screen is superior in terms of resolution and contrast.

Asus could crank that sucker out at massive scale and plummet the per-unit cost. It could also then move it into its netbook line, causing refresh upgrades there for people interested in better battery life and outdoor use.

It’d be all-win for Asus.

The one question remaining is: Adobe-DRM ePub compatibility?

Do we need to even ask that?

Asus is the company that brought Microsoft to its knees, causing it to slash the price of Windows XP.

They will do the same with Adobe and its license.

All of you companies that are planning on eInk eBook devices? Don’t bother. Stop now. Liquidate your companies. You’re dead.