Why eInk, ePub, And eBooks Will Fail

I’m reading The Art of the Start by Guy Kawasaki.

I came across a sentence that perfectly describes why the current paradigm of eInk, ePub, and eBooks are doomed to failure:

The TAM [Total Addressable Market] is the true size of the potential market you can go after, not the totality of every nickel that’s spent in something related to your product or service.

Let me illustrate that: 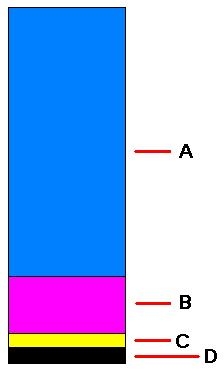 The chart is illustrative and not necessarily to scale (otherwise B, C, and D would be virtually invisible!).

We can perhaps expect a doubling of the current number of eInk devices. Perhaps even a tripling (though given the continued deterioration of the worldwide economy, that would be extremely optimistic). But that’s it. They will ultimately fail.

As was stated earlier:

… all the electronic reading gadgets on the market are subpar, if you ask me, making the reading of books, newspapers, magazines, and even cereal boxes painful. The resolution is poor. The fonts are crap. The navigation is chunky. Not since the eight-track player has modern technology produced such a heap of garbage. If you’re looking for the reason e-books constitute just 1 percent or 2 percent of all book sales, stop the search.

— Does the Book Industry Want To Get Napstered?

What’s beginning to happen right now — with so many new eBook publishers and eBook devices — is a classic Bubble.

This is what I saw happen back in the early 1980s with videogames.

Videogames are in fact a great analogy to eBooks: “software” that can only play on certain “consoles” (Sony Reader, Kindle), publishers having to strain to produce “software” for each “console” (MobiPocket, BBeB/LRF, Kindle, PDF), and consumers being hyped to get on board The New New Thing.

But understand what happened back then in the videogame industry itself: it died!

It wasn’t just major players exiting a market. The market itself dropped dead.

Buyers woke up to the fact they were being deluged with too much too soon — and most of it was utter crap.

eInk devices are slow, linear, and use flat and static files. They are simply less efficient than printed books and offer no advantages other than never having to buy another bookcase ever again.

People will wake up that they are shelling out an entry fee ($200-$400) in order to do something that’s “built in” to printed books: the ability to read.

They will also wake up to the nightmares of DRM, format incompatibilities, and the insufficiency of ePub eBooks over printed books.

Now let me address B in that graph. Those are the people who are currently using eBooks in two ways: desktop reading of mostly PDFs and the millions of people who have eBook capability on their smartphones (and iPod Touch). That market has the ability to still grow because the reading “entry fee” has been amortized in the cost of the device itself which is primarily used for other purposes.

However, to continue to believe that flat, static, and linear ePub files will triumph there is to invite delusion.

ePub eBooks (as well as Kindle and all other markup-based eBooks) lack respect. People regard them as teeny-tiny files that are a collection of words. The effort, energy, and thinking that are the ingredients of such things — books — are lost in the containerless translation.

Publishing will try to counteract that with a foolish strategy of ruthless price-cutting. It will lead to a race-to-the-bottom that will ultimately destroy book publishing — not just as we know it, but period.

Writing will be reduced to a marketplace of talentless deluded amateurs and outright con artists. The few true writers who will try to survive in this uninviting swamp will basically be holding out a tin cup hoping for spare change.

Those inside print publishing who can’t see this coming to pass deserve the unemployment that awaits them.

This entry was posted on Thursday, August 6th, 2009 at 3:54 pm and is filed under Axis of E, eInk, ePub. You can follow any responses to this entry through the RSS 2.0 feed. You can leave a response, or trackback from your own site.

8 Responses to Why eInk, ePub, And eBooks Will Fail