Would A US$50 eBook Reader Be A Disaster?

Study: Everyone Wants a Kindle–For $50

What we found was that the price points for how most consumers value eReaders is shockingly low–for most segments, between $50 and $99.

When it came to Jim Malcolm, Sony’s Director of Corporate Marketing for Mobile Lifestyle Products, I brought up the hardware pricing issue.

He saw this poll result: 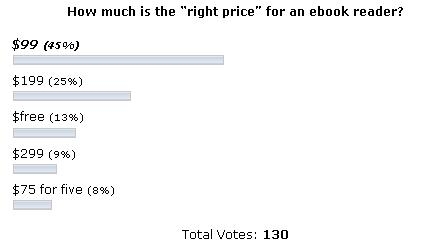 I’ve wailed for lower prices. As recently as this week, so has Dear Author.

This is basically what Malcolm told me. The poll results are from those who are tech-savvy early adopters. They already know the price of things and so, of course, would love eBook reading devices to even be as low as five for $20.00. Malcolm claims that Sony’s own research shows that hardware price is actually not a factor. Can I argue with their expertise and proprietary, professional research?

Yes. I know. I’m stubborn. Or I’m just an absolute eejit when it comes to real-world marketing, but I can’t but help to point once again to the example of Henry Ford and the Model T. Plus, there are the more recent examples of the Commodore-64 and the Asus EeePC.

Since then, that poll has added votes: 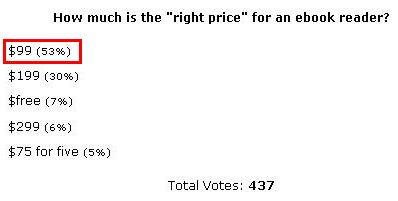 But wait, as the bad TV ads say, there’s more:

If half the people who own these devices are buying nothing, then there are at least three things happening here:

1) Piracy is rampant. That depends. So far, the only popular eBook format that has not been cracked is Sony’s own BBeB. Most people say it’s because the market is too small to attract the pirates. Most of the pirated material I’ve stumbled on has been either plain text or PDF — not file formats for the Kindle, the Sony Reader, or other such devices. So I doubt piracy.

2) People are reading only free eBooks. Really? I doubt this too. Why spend money on an expensive single-purpose device to read free?

3) There is no market for eBooks people must buy. And yet there’s the Kindle Store, the Sony eBookstore, Smashwords, et al. Yet none of them have actually published sales figures. And when writers have, the amounts of money mentioned have been equal to less than a one-month rent payment in New York City. Plus: that earned amount is not sustained over the long run. Is there no real market — yet?

Would a US$50 or even US$99 eBook reading device explode the market?

That’s possible … but the ramifications of that would not be good for many.

Right now, people are paying at least US$200 for an iPhone (a little more for an iPod Touch) — and there is resistance to paying for software!

That app retailed for an impulse-buy price of just US$1.99! 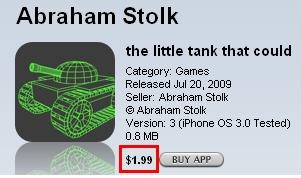 And yet people were stealing it right and left.

So what would happen when someone buys an eBook device for only US$50 or $US99?

Do you think people are going to look at an eBook priced at US$9.99 as being reasonable?

This does not bode well for the future. At least in the United States. Elsewhere, such a low price for an eBook reader would be a boon. See: In the footsteps of Carnegie.

And speaking of Carnegie, we don’t exactly live in a society where people express the sentiment he once did:

When I was a working-boy in Pittsburgh, Colonel Anderson of Allegheny – a name I can never speak without feelings of devotional gratitude – opened his little library of four hundred books to boys. Every Saturday afternoon he was in attendance at his house to exchange books. No one but he who has felt it can ever know the intense longing with which the arrival of Saturday was awaited, that a new book might be had.

Has anyone ever witnessed a line to a public library to rival, say, one to buy an iPhone?

No, don’t bring up Harry Potter and bookstores. That’s an event. The lines disappeared after that event.

Learning is not a one-off event. Yet public library patronage increases only during tough economic times. Like now.

So where does this leave us?

1) A public that is generally indifferent to book buying

3) The continued devaluation of the eBook

None of this is good for things as they are currently arranged.

Toshiba: We’ll Do An eBook Device Too!

Due to launch in “mid-2010”, Simons claimed they are “looking at 7 and 9-inch models”, however they’ll have to “see how much the 9-inch would cost”, before that size ever makes it to the market.

Interestingly, Simons said Toshiba won’t be going down the touchscreen route like Sony did with its Reader Touch model (pictured), instead preferring a non-touchscreen model. Simons told us “you don’t need a touchscreen to make an e-book reader work”, with the buttons doing it justice apparently.

Toshiba’s JournE touch to get VoIP and ebook functionality, dedicated e-reader planned for 2010

Perhaps more intriguing is confirmation that Toshiba is planning a new ebook device with similar inspiration as the JournE (Toshiba already makes the much different Biblio reader for Japan), but is holding off until a standard book format and distribution model is nailed down by the industry.

I predict it will never come to market. It will be killed in early development after the upcoming Christmas sales bloodbath and early 2010 burst of the Axis of E Bubble.

“Sony wants to file an amicus brief in support, since they think the Google Book project will boost e-reader sales.”

If you do that, you suck, Sony!

Google Book Search Will Win – But It’ll Be Pyrrhic