That’s what that item really means.

You can expect OS X to look much more like iPhone OS beginning later this year. The current face of it isn’t fingertip-friendly nor amenable to the grammar of touch.

Apple’s learned lots from the iPhone OS. They’ll incorporate that as well as add many new features not possible on a smaller display. Some of the new interface on the upcoming iSlate will provide hints of that. 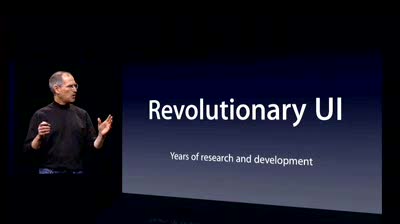 And you can bet the shiny new OS X will include gesture macros.

Vook digital books will look incredible on it.

This will be the year that Apple really pulls away from the legacy model of desktop computing we’ve all been trapped in.

Nothing will ever be the same again.

Save some screensnaps of the current Internet. It won’t look anything like this by the end of 2011. The screwball and brain-dead scrolling down to read that’s been a torment to us all will be dead.

Catch up to what’s coming by reading the prior posts.

Will The iSlate Include Gesture Macros?
The INEVITABLE Changes The iSlate Will Create
Apple’s iSlate: Digital Waveguide Touch?
The Ugliest Fight Ever: Apple Versus Google
The 7 Principles Of Apple
How To Do Touch Right And Wrong
The iPod Decade And The Steve Jobs Effect
Touch Will Change Everything
What One Big Change Would An Apple iTablet Bring?

This entry was posted on Monday, January 18th, 2010 at 2:05 pm and is filed under Apple, Digital Book, iPhone/iPod Touch, MiniTablet, Vook. You can follow any responses to this entry through the RSS 2.0 feed. You can leave a response, or trackback from your own site.