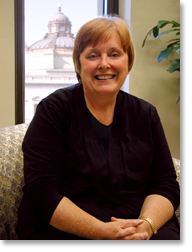 She takes her role as guardian of Copyright seriously, knows her stuff, and doesn’t back down. She is a hero to every writer out there!

Hearing on Competition and Commerce in Digital Books: The Proposed Google Book Settlement

I’m not Blockquoting these, so they will be easier to read. Italics in the original. Boldface emphasis by me.

Instead, the so-called settlement would create mechanisms by which Google could continue to scan with impunity, well into the future, and to our great surprise, create yet additional commercial products without the prior consent of rights holders. For example, the settlement allows Google to reproduce, display and distribute the books of copyright owners without prior consent, provided Google and the plaintiffs deem the works to be “out-of-print” through a definition negotiated by them for purposes of the settlement documents. Although Google is a commercial entity, acting for a primary purpose of commercial gain, the settlement absolves Google of the need to search for the rights holders or obtain their prior consent and provides a complete release from liability.

Under the proposed settlement, the parties have crafted a class that is not anchored to past or imminent scanning, but instead turns on the much broader question of whether a work was published by January 5, 2009. As defined, the class would allow Google to continue to scan entire libraries, for commercial gain, into the indefinite future. The settlement would bind authors, publishers, their heirs and successors to these rules, even though Google has not yet scanned, and may never scan, their works.

We do not know the parties’ reasons for defining the class according to whether a book was or was not published by January 5, 2009, but the result is to give Google control of a body of works that is many times larger than the 7 million works that were originally at issue. As defined, the class would bring into the settlement tent not only works that were published in the United States, and are therefore directly subject to U.S. law, but works published in most other countries in the world that have treaty relations with the United States.

Here, no factors have been demonstrated that would justify creating a system akin to a compulsory license for Google – and only Google – to digitize books for an indefinite period of time.

The Google Book Settlement gives Google carte blanche permission to use out-of-print works by operation of the default rules.

In essence, the proposed settlement would give Google a license to infringe first and ask questions later, under the imprimatur of the court.

A class action settlement that permits new activities for years to come, and removes the judicial remedies of millions of authors and publishers that are otherwise afforded by the Copyright Act, seems to us to be an excessive exercise of judicial power. The default rules for out-of-print books are not a small issue in the settlement because the substantial majority of books covered are out-of-print works—millions and millions of books.

The broad scope of the out-of-print provisions and the large class of copyright owners they would affect will dramatically impinge on the exclusive rights of authors, publishers, their heirs and successors.

The Office also notes that while the BRR might well provide a place for rights owners to come forward with contact information, it is also likely to have the unfortunate effect of creating a false database of orphan works, because in practice any work that is not claimed will be deemed an orphan. Many rights holders of out-of-print books may fail or refuse to register with the BRR for very good reasons, whether due to lack of notice, disagreement with the Registry’s mission or operations, fear (e.g. privacy concerns) or confusion. The fact that the rights holder is missing from the BRR may also mean that he has no interest in licensing his work.

To summarize, it is our view that the proposed settlement inappropriately creates something similar to a compulsory license for works, unfairly alters the property interests of millions of rights holders of out-of-print works without any Congressional oversight, and has the capacity to create diplomatic stress for the United States.

Her statement is available as a PDF at this page, links in the right column.

This entry was posted on Thursday, September 10th, 2009 at 5:52 pm and is filed under Google. You can follow any responses to this entry through the RSS 2.0 feed. You can leave a response, or trackback from your own site.

3 Responses to God Bless Marybeth Peters Of The Copyright Office!