J&R had in the three colors of the new Sony Reader PRS-300. I did a quick fondle of it.

First, let’s get that Rose Red color out of the way: It’s PINK! Some photos showed it approaching actual red, but it’s not. It’s a nauseating, vulgar pink! It’s even lighter than the above image. It’s a shame Sony didn’t reprise the luscious Sangria Red of the 505.

Second, the other two colors: Navy Blue and Silver. The Navy Blue is better than the Dark Blue of the 505. It actually looks Navy Blue, and not black. I like this blue better than the 505’s. The Silver is still silver, although it doesn’t have the gloss of the 505’s Silver. I came away with the impression: Navy Blue = Corporate, Silver = Machine.

This thing is made primarily of plastic. The front is aluminum — but the matte color finish makes it feel like plastic. The back is all plastic. The strip that runs along the side and top/bottom is glaringly plastic. Did it feel cheap? No. But it did feel as if it was really pushing that $199.00 price tag to the limit.

My initial impression was one of weight. It felt dense and heavy. Heavier than I expected to be. It’s also thick. I was very surprised by its thickness. The 505 was thin and sleek. How did Sony manage to pork it up? This might be uncomfortable to carry in a jacket pocket — especially with the added weight and thickness of the slipcover or optional flip-cover. Though YMMV, as they say.

Sony has deleted the wonderful lower left-corner page turning button in favor of the 4-way in the center. I didn’t find it particularly onerous to use the new control. But given my past fondles of the Readers with the corner control, it took some getting used to doing things so differently.

1) You’ll need a second hand to set a Bookmark. No way will your thumb be able to crawl over to hit that Bookmark button without the risk of dropping the Reader.

2) Man, having a fold-over cover on the PRS-300 is going to be Teh Suck! Because your thumb is no longer at the bottom left to keep that cover standing up. With your thumb in the center, that damned cover is going to flap down and be annoying as all hell. So, you can either hold it in one hand to prop up the cover and change pages with the other, or be annoyed over and over again by the flapping cover.

It’s a laggy little beast! To me, it seemed as if Sony took the original slower 500 and repackaged it with more memory in a smaller form factor. The CPU specs seem to bear this out:

It felt slower than the 505 to me. Books opened slower and the first pages turned noticeably slower than moving several pages in. It seemed as if it was still loading the book or still waking up. This caused the 4-way button to seem unresponsive at times — and when it finally kicked in, I wound up overshooting the page I was aiming for and going two and even three pages past!

The eInk was … eInk. I didn’t see much difference than the 505’s screen. Blacks were dark and grayscale images were OK — in terms of eInk.

Sony used to bundle several free eBook samples on the Reader. All of them would be excerpts from recent books, to entice you to buy them. Sony includes eleven freebies on this — but they are in English, German, and French! I suppose this reflects the new internationality of the Reader and it saves Sony additional effort to cater to each region. Not all of these are recent for-pay books, either. Only one of the English ones was recent (if my memory is correct, it was The Strain by Guillermo del Toro). Two of the French books were freebies from Feedbooks! — one by Dumas, one by Stendahl.

What I found interesting about the samples was the strangeness of the typeface size. Feedbooks looked simply gorgeous at the Small font setting. It looked like a mass-market paperback page, with lots of type on the page. A BBeB eBook at Small setting had type that was twice as large as the Feedbooks text at the same setting. I don’t know what accounted for that.

I didn’t test for things such as glare or viewing angle. I was too busy moving around the wrong way due to the new 4-way navigation system. I also didn’t pop into Settings or anything other than the sample books. This was a nano-fondle — and at that it took a good ten minutes due to having to “unlearn” my prior Reader button use.

If you want to fondle the PRS-300 head to J&R in lower Manhattan. I hear that SonyStyle at 55th Street has both the PRS-300 and PRS-600 out for fondling too.

My verdict is to hold off buying this until Apple’s September 9th announcement. I still expect an iPod Touch with a six-inch screen to be unveiled. At even triple the price of this, it’d be a better buy in so many ways.

SECOND UPDATE: Yes, there is Rotation. This is from the Owner’s Manual: 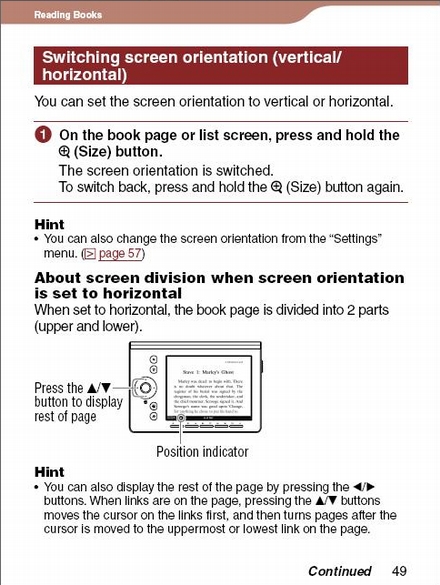 It’s now using a different button and it’s also under Settings, which I already stated I failed to check.

This entry was posted on Saturday, August 29th, 2009 at 3:09 pm and is filed under Sony Reader. You can follow any responses to this entry through the RSS 2.0 feed. You can leave a response, or trackback from your own site.