She is hooked on her eBookwise antique: 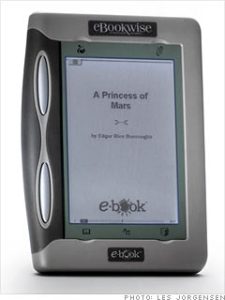 But lately she’s been agitating for a machine that was actually born in this century.

And she thinks that machine will be an Asus EeePC.

Instead, look at this:

That’s a PDF in portrait mode on a ten-inch backlit color screen.

And it’s a netbook too. It’s the Gigabyte Touchnote T1028M 10” Touchscreen Netbook.

It has one of those screens that twist and flip over to become a tablet. It does landscape and, as shown, portrait.

If you have to get a frikkin clunky-ass netbook for your next eBook device, get that one.

Here I am bugging Chippy to demo a PDF on it for me:

The PDF he chose was formatted to display two pages on one sheet, so that’s why you’re not seeing the edge-to-edgeness of a one-sheet PDF.

The CrunchPad: For Home Only?

This weekend I stopped in J&R to see what was new.

I happened upon one of those hp notebooks with a 12″-inch screen that twists around to form a tablet.

Conveniently, someone had already twisted it into a tablet, so all I had to do was pick it up to get a taste of what it would be like to hold that 12″-screened CrunchPad.

I’m not going to count weight because the CrunchPad won’t have the heft of that hp.

The size of it, however, tells me a CrunchPad is something I’d keep at home and not tote around on my shoulder.

Which I really think is the market they’re aiming at: couch-surfing.

I’d use it for that as well as reading the ton of free PDF-formatted eBooks that have been sitting on my hard drive.

I really hate having to think up things that people who make a huge multiple of my yearly income should be bright enough to envision and propose on their own, but it seems this is my curse in life, so here goes.

Appropo of my prior post, emphasizing freedom of buying choice, I propose the formation of the Universal eBook Catalog.

This would be a catalog that would list everything. Nothing would be verboten.

If it’s on the Internet in eBook format with a pricetag, it would be listed.

The primary thing about this Catalog is that it’s just that: a catalog.

It’s not a bookstore.

All it does is show what’s available and then offers links to where the eBook can be bought.

This would be akin to the function of, for example, The Pirate Bay, which has links to items but does not offer that content itself. (In fact, it would probably be in the best interest of everybody to have The Pirate Bay do this. Point to another group of people who have been as fearless as they have been and are!)

Listings would be absolutely free.

I see this as being underwritten by advertising.

Advertisers would be eBook makers, eBook Stores, and publishers. (I can also see TV shows and movies based on books — or that have book spinoffs — as advertisers.)

There’s recently been a proposal for a cataloging format — but that is only to formalize how publishers should structure their information.

This catalog would aggregate all that information in one place.

Given the actions of Apple and Amazon, I think it’s time for something like this if only as a matter of self-defense.

eBooks are too important to be given up to monopolistic interests who cringe in the face of political or moral opposition.

Preface: Before publication, I stopped to do some background reading. A hacker is taking responsibility for this mess. Someone else is backing him up.

I don’t buy that as a complete explanation. What about the writer who sounded the first alarm back in February? What about Amazon’s own public statement on the matter?

I took two days off Twitter and during my absence a huge scandal erupted over Amazon banning certain books from search results, rankings, and lists.

Why should anybody be surprised?

Apple was the first to ban a book. And it seems it has managed to do so with impunity too! (So much impunity, in fact, they did it a second time!)

Given that action, why shouldn’t Amazon have been emboldened to act similarly?

We’ve all be hypnotized by convenience for the sake of our own good.

Everyone is in a selfish swoon over the immediate gratification the abominable Kindle offers.

That selfish pleasure comes at the cost of screwing publishers and turning direct-publishing writers into Amazon’s indentured servants.

When you give up your power and assist a monopoly, don’t cry later on that you’re being abused.

This is what it’s about: No one company should ever have enough power to deform the marketplace to its liking.

Not Apple, not Amazon, not Palm, not Microsoft, not Google, not Barnes & Noble, not Sony.

I’ve stood against the tide of Kindle worship because I could see what it would lead to: exactly the kind of behavior Amazon has revealed itself to be capable of committing.

This is why I’ve stood against everyone in favor of the Sony Reader. You might have to be inconvenienced right now to load books onto it via old-fashioned cable, but Sony is in this for the long run and sees its Reader as a universal eBook device.

That means when wireless of the Kindle kind is finally built into it, it will offer owners a freedom of buying choice that we have only seen a sneak preview of with Stanza Reader on the iPhone.

Each publisher, each author, can sell directly to readers without surrendering power to a colossal intermediary such as the Apple App Store, Amazon’s Kindle Store, or even Sony’s own eBook Store.

Freedom of choice in the eBook marketplace should be the vision in the forefront of every reader’s mind.

Screw having your eBook right now.

When you go for that, you’re giving up the power to have all possible choices later on.

Exactly what kind of future do you want to have?