Maude Newton re-tweeted a link to an article about Google making a mobile-friendly version of its Book Search writer-robbery site.

I went to have a look.

As some of you will already know, on and off I have been working to wrestle The People of the Abyss by Jack London into an ePub eBook.

Since I have become very familiar with London’s book, I zeroed it on that one to see what it looked like on the new mobile Google Book Search.

Just look at these screensnaps, with click to enlarge: 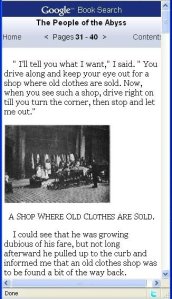 I squeezed the desktop Firefox window to simulate a cellphone screen. Pretty neat at first glance, eh? I thought for sure this would replace all the work I’ve been doing on my ePub edition.

From the first word, it’s riddled with typos!

And it just goes on and on like that:

At first, I thought all they were doing was re-using the dreadful OCRed text. But something else is going on here. Something bizarre. Look at the OCRed text (click to enlarge):

The first word is correct and the other artifacts aren’t present!

So what is Google doing here?

But it’s sloppy, inexcusable, and tantamount to vandalizing historical texts.

I will continue with my ePub version.

Unlike Google, with its thousands of employees and billions of dollars in the bank, I care about the work of writers. My version won’t have typos.