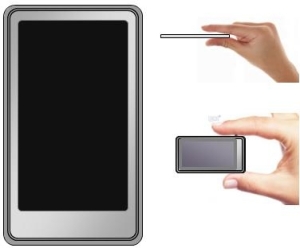 Sony is set to debut a new 16 and 32GB drag and drop Walkman during CES 2009, according to trusted inside sources. This will be the most advanced music, video and photo Walkman music player ever released by Sony to date. While it was revealed before to Wired that Sony’s new Walkman would have Wi-Fi capabilities, we have now learned that Sony’s new Walkman will also be touchscreen and WQVGA. The touchscreen will not be the usual LCD, but a brilliant three inch OLED with a contrast ratio around 10k. OLED display capabilities in terms of color reproduction are far beyond the average LCD, which means 100% color reproduction across a wider viewing angle.

Here is what makes me angry:

Wait. This is a WQVGA OLED screen with a CPU powerful enough to do YouTube video (and MP4!) — and there’s no Sony eBook software built-in?!

That doesn’t make any sense to me.

Both the BBeB and ePub file formats support reflowable text. The screen size doesn’t matter, they’ll work with it.

Sony is trapped in Western Union thinking here. Western Union famously turned away Alexander Graham Bell’s telephone, thinking it was in the telegraphy business — instead of the business of communication.

Sony is trapped in thinking eBooks = Sony Reader. No! It should be eBooks Everywhere. (By the way, Sony, do you bother to bundle the eBook Library software on all desktops and notebooks? Why not?!)

Here was a way for Sony to advance eBooks and to provide an immediate alternative to the wireless abominable Kindle — and it’s been lost.

Why not offer it as a future downloadable upgrade?

Since this will have a built-in web browser and WiFi, people should be able to access Project Gutenberg and other sites that offer web access to eBooks and could read that way.

But a major opportunity has been missed here!

This entry was posted on Friday, December 12th, 2008 at 7:43 pm and is filed under Uncategorized. You can follow any responses to this entry through the RSS 2.0 feed. You can leave a response, or trackback from your own site.