New York, NY – December 8, 2008 — The Random House Publishing Group and Lexcycle, Inc., jointly announced today that Random House and Ballantine will be the first major book publishers to make full-length books available for free on iPhone through Lexcycle Stanza, the most popular electronic book reader for the Apple iPhone and iPod Touch.

This promotion will allow over 500,000 Stanza users to enjoy free eBooks from a varied list of authors including Alan Furst, Julie Garwood, Charlie Huston, David Liss, Laurie Notaro, Arthur Phillips and Simon Rich. The initial offerings will be drawn from each author’s backlist and will include excerpts for any new hardcovers coming in 2009. Random House is providing links to retailers like Amazon, Barnes and Noble.com, Borders.com, Powells.com and IndieBound.org to encourage readers to purchase more books by these authors.

“A free eBook is a great way to sample a new writer, and help spread the word,” says Charlie Huston, whose novels ‘Caught Stealing’, ‘Six Bad Things’, and ‘A Dangerous Man’ will all be available on Stanza. “Besides, it’s good to give things away. They’re books. We write them for people to read them.”

What’s exciting about this new Stanza way of getting them is that they aren’t in PDF format! Apparently they’re in glorious ePub, which will make them even more exciting to read!

And don’t forget: It’s not necessary to buy an iPhone. All of this will work with an iPod Touch too!

The bigger news comes from Penguin Group USA, which today announced a new program it is calling Penguin 2.0, Called by CEO David Shanks, “the next evolution of the Penguin brand,” the Penguin 2.0 initiative at this point includes two programs, both centered around a new section of the Penguin Web site: http://www.penguin.com/whatsnext, which will feature a new blog and access to exclusive Penguin content, including enhanced e-books, videos and special print products.

So I went there: 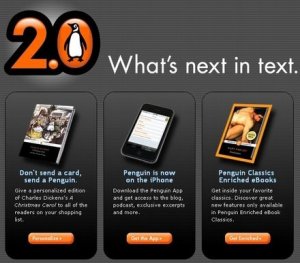 And of the eight(!) titles, Upton Sinclair’s The Jungle caught my eye:

* How to Navigate Guide
* Upton Sinclair Chronology
* Filmography and 1914 The Jungle Film Poster
* Early Twentieth-Century Reviews of The Jungle
* Upton Sinclair’s Letter to the Editor of The New York Times
* Suggested Further Reading
* The Jungle and the Pure Food and Drug Act of 1906
* The Jungle Book Cover Designs
* Federal Food and Drugs Act of 1906
* Immigrants and the Meatpacking Industry, Then and Now
* Images of the Chicago Stockyards
* Images of Cuts of Beef and Pork
* Enriched eBook Notes

As for “Upton Sinclair’s Letter to the Editor of The New York Times.” it’s right here, for free, in this PDF link.

What about the book itself?

It’s been scanned by Google and the OCRed text is at the Internet Archive and in HTML at Project Gutenberg.

But would I want either of those?

I’ve pointed out the silliness of at least two of the “extras,” but I will admit that I would pay for a professionally-formatted eBook of The Jungle.

Would I pay Penguin’s ten bucks?

On the one hand, that would encourage them to add material I don’t want or need to boost the sales price. That would also enable them to claim a floor on eBook pricing and then slap higher prices on newly-published eBooks, saying those prices are no worse than paying $10.00 for something “free.” 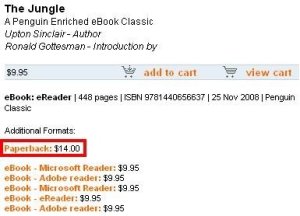 On the other hand, I do want professionally-formatted eBooks. And since The Jungle is in the public domain — and I’ve already read it and have no pressing need for it as an eBook right now — I could wait to see if someone else comes along with a less-expensive eBook edition.

Given that the extras aren’t so compelling to me, I’d be inclined to pass up Penguin’s edition and wait.

The eBook Tax: Some Publishers Want Hardcover Prices to Be Ebook Pricing Standard