If Borders were to go bankrupt — and this is still an if — it would be one of the greatest catastrophes to hit the publishing world in decades. Even after liquidating as much stock as possible, publishers would receive massive returns, millions of dollars would be lost, and going forward, publishers would have 1,100 fewer stores to sell to.

All the more reason for every publisher — big and small — to ante up and really, truly bet on eBooks.

And with the Sony Reader’s vision of wireless to come, publishers (and writers!) can set up their own stores to sell their own eBooks.

Sure, people can still order print books from Amazon — but do publishers really want Jeff Bezos to have a second hand around their necks?

With the right marketing, eBooks can fill the gap: The Bookstore Comes Home. (Note, I do not consider that good marketing, but it is one of the points that should be made, I think.) 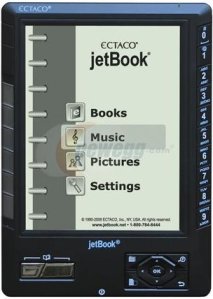 Teleread reports the ECTACO jetBook is $100 off at Newegg, making it now hit the Golden Spot of $199.00 for an eBook reading device.

Since then, ECTACO has announced ePub and MobiPocket support will be coming:

With The International Digital Publishing Forum newly released EPUB specification format based on XML, this is the new standard for eBook production and leading eBook device manufacturers.

Ectaco announced that the jetBook eBook reader will support both – most popular in US MobiPocket format and open EPUB format in Q1,2009. Many professionals think that this event will make jetBook the greatest eBook reading platform in the US and Europe

— but what’s unclear here is whether the current hardware will support it. Also unclear is whether it will suppoort DRMed ePub and MobiPocket files.

Buyers of the original Sony Reader PRS-500 had to trade-in that model for $100 towards the PRS-505, because the 500 hardware could not support ePub and PDF reflow.

So while $199 is an absolutely great price (especially when ECTACO’s own “holiday sale price” is $309.95), it still might not get any capability beyond what it currently offers. 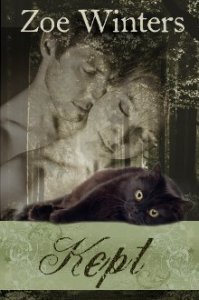 Also at that post, details of other file formats coming shortly.

Note to Zoe and all others: I need big covers. Something at least 440-pixels wide for blog pimpage here. 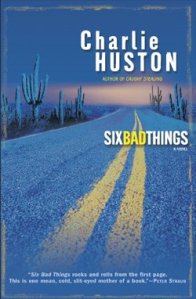 It’s in PDF format and the link is at the bottom of this post.

E-books are still a topic that manage to enrage the nation. Half are for, half are against, and most feel the price isn’t justified. But is either side right? And if you take into consideration the price of an average book, surely paying a one off fee for an e-device that comes with literally thousands free to download isn’t such a bad deal? I’ve been road testing the BeBook, and can now present to you my findings. And it’s love.

This is one area the BeBook really excels in as it reads around 25 formats. I’ve opened lit files, JPEG’s PDF’s and txt files with absolutely no problem and have placed RSS feeds on it by syncing it up via USB to MobiPocket. I’m impressed it supports the DRM protected formats such as Microsoft Lit and Mobipocket as that places it heads and shoulders above its competitor, the [Sony] Reader — which I’ll get too soon.

The thing about both Microsoft LIT and MobiPocket file formats are that they are legacy. They’re less likely to be around now that major publishers have agreed to support the ePub file format. I suppose the BeBook would be useful for people who already have a very expensive investment in those formats. But I think it’d be worth the effort to violate the DMCA and rip those eBooks to another format.

I like how the BeBook site includes an online library that’s free to download, even though the books are a selection of old classics.

Well, here’s some Show and Tell. This is what the BeBook-formatted PDF of The Adventures of Sherlock Holmes looks like: 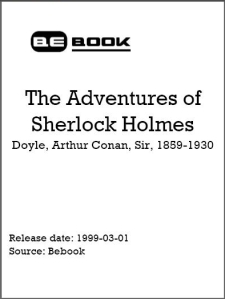 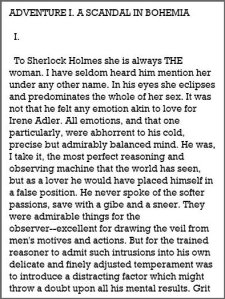 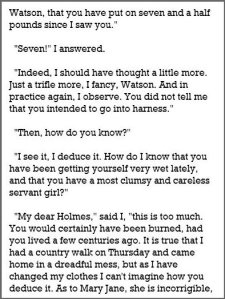 That is just gruesome formatting! It’s the worst kind of amateurism.

I always use this story as an eBook formatting litmus test because Conan Doyle rarely used italics in his stories and in this one, “the” is critical. Here it is capitalized. Rubbish!

It continues with this bit:

The Sony Reader needs to be mentioned as it’s the main player on the UK eBook market. So how does it compare? Well it’s certainly more stylish to look at and has 12 shades of eInk compared to the BeBook’s 4. On the downside, it’s heavier, bigger and books are locked to DRM. That’s probably the crucial factor at the moment and why the BeBook is worth the extra £30.

What? £30 more for something that can’t do ePub? That can’t borrow eBooks from public libraries (something which will be coming even to the UK, if it hasn’t already)? Double rubbish! And there are DRM-free ePub eBooks available. (And by the way, the Sony Reader has 8 shades of gray, not 12.)

25 e-books to buy before Christmas

We’ve all had a good look at books, and frankly, they’re outdated. All that paper is SO eco-unfriendly, and packing 10 John Grisham thrillers into the holiday suitcase takes up valuable space for more important sombreros.

E-book readers help solve all these problems, and we’ve trekked through the virtual internet library to see the best tomes on offer (we even got shushed by the robot librarian).

This is from the British magazine T3, so every eBook might not be available for purchase elsewhere. But it’s still an interesting list to read. They do a bit of cheating, though, by including four free eBooks.

Really, do I have to announce the winner? Moi?

40,000-a-day. That’s how many e-books are getting downloaded through Stanza, the simple e-book platform for the iPhone/iPod. I’ve got 35 of them sitting on my iPod. All of them free, public domain or creative commons, and DRM-free.

The reason I have 35 books downloaded onto my Stanza is: a) it is easy, b) it is free.

What does this mean for your business model? I don’t know, but I assure you that when I finish War & Peace, I’ll be buying a hard copy. And I also assure you: I love reading on that little thing.

An Entire Site For Free eBooks!

My name is Mark Gladding and I’m the founder of a small software startup, Tumbywood Software, based in Melbourne, Australia. Over the last couple of years I’ve become an enthusiastic reader of eBooks. During this time I’ve read many books from sites like Project Gutenburg and The Baen Free Library. I’ve also stumbled across gems from the likes of Cory Doctorow (Someone Comes to Town, Someone Leaves Town & Little Brother), Bob Walsh (MicroISV Sites that Sell), Stephane Grenier (How to Generate Traffic to Your Website), Seth Godin (Unleashing the Idea Virus), Zen Habits (Zen Habits Handbook) and Steve Jordan (As the Mirror Cracks) to name but a few.

I’ve discovered there’s a lot of great eBooks being published all the time by independent authors. Unfortunately they’re not always that easy to find. Doing a search for ‘new eBooks‘ returns results for a few eBook sites, many of which don’t have new eBooks at all. Instead they are full of expensive, DRM-protected eBooks that are locked to your PC or mobile reader device. There are many reasons why DRM is a bad idea but personally I don’t like DRM because it prevents me from converting my eBooks to speech so I can listen to them on my iPod.

I wanted an easy way to find out about new DRM-free eBooks as they’re released. So I created this site where authors can announce their eBooks and readers like myself can subscribe and keep up to date with all the latest eBook releases.

I hope this will grow into a daily go-to site.

The first one-third of three of his novels — Crystal Rain, Ragamuffin, Sly Mongoose — are available in RTF file format for free.

And best wishes for a speedy recovery.

What is Book View Café?

Book View Café is a cooperative site created by a group of writers who want to take advantage of the internet’s possibilities for reaching a wider audience and to distribute their work directly to their readers.

Is Book View Café a publisher?

No. We’re more like a co-op bookstore where all our member authors bring their work to sell, or to give away.

Who are the Book View Café members?

The members of Book View Café are all professional writers, representing the wide diversity of popular fiction.

Why did you decide to start Book View Café?

To provide you with access to our work in electronic form. Ideally, it would also provide you with a wider selection of fiction from some of your favorite authors than you’ve had before, and provide us a more direct link with our readers. Of course, we also wanted to take advantage of the internet to get the word out about our books.