Abominable Kindle And The Oprah Effect

Which, gee, the uninformed might be very impressed by seeing.

However, let me dispel that malarkey.

This first chart is Google Trends for Kindle vs. Sony Reader for all time periods across the entire world:

Notice how the Sony Reader is no laggard and has massive interest outside the United States!

OK, well those scores mean nothing, Kindle fanboiz shout, because the Sony Reader has been out longer.

Fine. Let’s compare around the world for the just the past thirty days:

Again, the daily searches for Sony Reader outpace the Kindle!

And finally, let’s just do within the United States for the past thirty days: 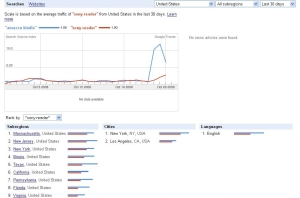 And there’s the Oprah Effect. Without it, the pace would have favored the Sony Reader.

But has the Sony Reader been trumped by Oprah?

No. I’ll come back to this chart in the days after Dave Farrow emerges from the DataVision window.

I expect the Sony Reader to be higher and the Kindle to have plummeted back to earth.

*(He characterized me as a “Sony Reader fanboy” — but who’s the one with an entire site devoted to one device, hm?)

This entry was posted on Tuesday, October 28th, 2008 at 12:36 am and is filed under Uncategorized. You can follow any responses to this entry through the RSS 2.0 feed. You can leave a response, or trackback from your own site.