GLENDALE, Calif. – Oct. 6, 2008 –Sony Electronics is opening a new Sony Style store, located at The Americana at Brand in Glendale, Calif., and offering a first look at the new Sony Reader Digital Book. The new model, PRS-700, incorporates an interactive touch screen display for the most intuitive digital reading to date.

The Sony Style stores will be the first place where consumers can test drive as well as pre-order the new Reader beginning next week.

If you’re not near a SonyStyle Store, it can be pre-ordered via the SonyStyle site now: 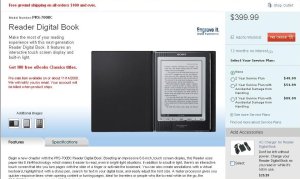 Be prepared to exercise patience. Note the availability date:

Update: As of October 11, 2008, the videos seem to have been taken down. I have no idea why. I will, however, keep the screensnap. And if I find other videos, I will update this post with a link to the new post.

Both are the excellent handiwork of Jakub Kanczugowski.

This first one in quick clippage does a tour of many features of the new PRS-700:

I’ve grabbed this screensnap from the second vid: 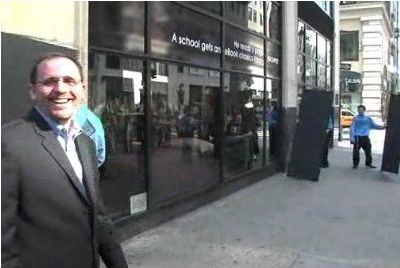 This is Jim Malcolm, Sony’s Director of Corporate Marketing for Mobile Lifestyle Products. The Reader Revolution campaign is his baby. Well done, Jim!