I had to know, so I went to that Borders I mentioned yesterday to see the Sony Reader Revolution campaign in real-life action.

According to Sony’s own site, these were supposed to be today’s hours for the Revolution:

I got there at about 4:15PM. I got there within an hour of departing for it because I spent carfare to take the bus and subway. OK? I. Spent. Money. I didn’t walk (which, aside from the ferry in-between, I’d sometimes do).

I went in and looked around, not wanting to ask where these exciting eBook festivities were taking place.

Nothing on the Ground Floor.

I go up to the Second Floor.

So I break down and ask.

I’m told the Sony Reader area is next to the “first information booth” — back on the Ground Floor.

Get this: I walked right by it on my way to the Second Floor!

That gives you an idea of the FAIL! of this alleged Revolution.

Sony, I don’t know if you hired a temp or if Borders was supposed to task someone to pimp the Sony Reader, but there was no one.

What there was, was this sad-assed kiosk that — I repeat — I walked right by while I was looking for it!

Here is the sad sad sad evidence from the Philips crapcam: 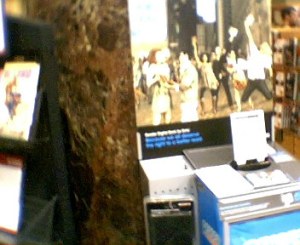 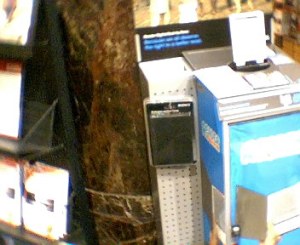 How forlorn? Just one accessory on it! One!

See the Revolutionaries? I sure didn’t!!

Very craptastic: even the skirting was put on lousy!!

But I did walk away with some cheap swag: 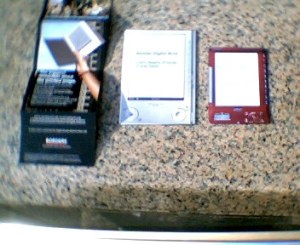 Oh, that jetBook card got in there because after Borders, I stopped in J&R. Where I was ejected for spraying drool all over the counter protecting the red Sony Reader!! (Half true. I fled after spraying!) 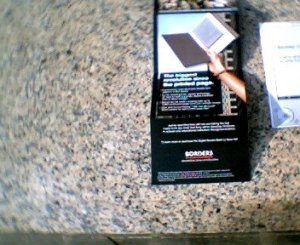 Look! You can see it says Borders. Shame!! 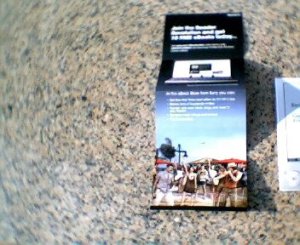 Other side of the FAIL brochure.

And the FAIL is even compounded!

The Borders brochure gives you a code as a Thank You for submitting to a demo. It allows you to download ten free classics eBooks! But get this: Because some retard at Sony spackled frikkin DRM on those public domain works, you must sign up for a Sony eBook Store account and give them your credit card number in order to get these “free” classics!

Sony, when will you get a frikkin clue?!

Look, hire a goddammed temp. Have him/her do up your own versions of these classics so you can get rid of the damned DRM. Then at least people can really, really get them for free.

Expecting people to jump through confiscatory hoops for free is just Major Dumb.

In fact, let me go further: You’re outright lying. They’re not free. They’re “free in exchange for” — which, hello McFly!, is the definition of a sale!

You’re not getting money, but you’re getting something.

And that’s a transaction.

Christ, Sony, when will you guys stop pissing me off?

Will that happen on October 2nd? I hope so!

This entry was posted on Sunday, September 21st, 2008 at 11:28 pm and is filed under Uncategorized. You can follow any responses to this entry through the RSS 2.0 feed. You can leave a response, or trackback from your own site.