BTW, Walmart.com sells the Sony reader at below MFSR. It’s been there for at least a month. 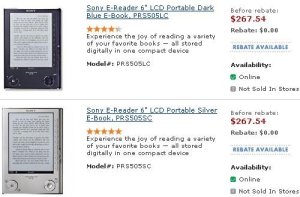 Even more, it still has the offer for the 100 free classics (which, if I’m reading the PDF terms correctly, is now download 100 of your choice out of over 900 available at The Sony eBook Store). This is the PDF rebate link (Save As…).

I suggest the Silver. For some reason, the Dark Blue model is just too dark and tends to lower the contrast of the eInk. Strange, but that’s been my in-person observation.

Writer Gives Away His Printed Book

Source article: Free publicity: give your books away

There are many zany tactics adopted by publishers and authors to get their books noticed, but how about giving them away for free? John Warner, chief creative tsar of struggling independent publisher TOW Books, is so sick of sending his books out to newspapers and magazines and television shows for review, and hearing nothing back, that he’s decided to give up on the media and send books directly to his readers.

Article by the writer: TOW Books: How to fail at publishing a whole new way

Now, after two years of, let’s call it, non-success, I understand that the problem is at least as much about publicity and distribution as it is about quality. (At least I hope that’s the problem.) So I’m here to announce that if TOW Books is going to fail at publishing, we are going to fail in our own spectacularly new way.

How badly are we struggling? Well, we’ve released four books. Their Amazon rankings at the time of this typing are:

Another publisher who tried that with blogs: Blogger Reviews of Our Obama Book

A couple of weeks ago, I made an offer to bloggers. I told them that we would send them a free copy of The Faith of Barack Obama by Stephen Mansfield in exchange for their agreement to write a 200-word review of the book.

This isn’t exactly new. Writer Cliff Burns (see here and here) — among other writers — will attest to that.

And let me remind everyone about Mini Book Expo for Bloggers, an entire site that is set up to be a liaison between publishers and bloggers who are interested in specific books.

David Foster Wallace, the novelist, essayist and humorist best known for his 1996 novel “Infinite Jest,” was found dead Friday night at his home in Claremont, according to the Claremont Police Department. He was 46.

Jackie Morales, a records clerk at the department, said Wallace’s wife called police at 9:30 p.m. Friday saying she had returned home to find that her husband had hanged himself.

The news broke to me when I signed onto Twitter an hour or so ago.

I dislike suicide. It’s usually undertaken because of feelings. Feelings are the worst reason to suicide. The second worst reason is money.

I can understand suicide when facing a protracted, incurable, and terminal disease.

But because someone feels bad?

Damn, there are pills today that can really help with that. There’s no shame in popping a prescription to nudge the brain back towards self-preservation. Why should there be any shame in that? A bunch of dendrites malfunction, or the balance of chemicals goes awry — no different than popping aspirin for a headache. I’ve never, ever heard someone proclaim shame over taking a pill for a headache. So why should there be shame for what is essentially a brain or mind ache?

And since he was a writer, he’d just about be expected to have a black dog stalking him at some point. It’s an occupational hazard. The shadow that falls over the vocation. The dark side of the calling.

If anyone out there reading this is considering ending his or her life due to feelings, go get some medical attention. Don’t let your mind trick you into thinking there’s no hope. There is. Hop on a pill to transport you to the other side of that bleak tunnel.

Me, I thought it out a long time ago. That’s why I nurture my spite. Even if I ever lose all hope — in terms of self-feeling — I can always cling to my spite.

Spite is my life preserver.