Apple And A Tale Of Two Bannings

How ironic this is, just twenty-four hours later! 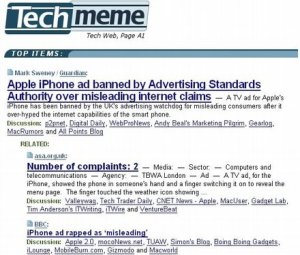 Apple has had a TV ad for the iPhone banned in England for making claims that are unsubstantiated by end-user real-life experience.

Just yesterday, it was Apple who was doing the banning:

While the English Advertising Standards Authority adjudicated a technical issue and could render a black-or-white decision, Apple’s stance in banning a comic book has yet to be merited.

For those who need the details of Apple’s banning, see yesterday’s post: Apple Forfeits eBooks By Banning A Comic Book!

Apple’s woes are not yet over, when it comes to advertising claims. As I’ve posted earlier, there is a huge discrepancy over what is advertised and displayed in TV ads as an example of YouTube playback and the reality of that experience under 3G reception. As I wrote earlier:

If this is the new shape of YouTube on iPhone, Apple has just opened itself up to getting sued by Attorneys General all across this country. You can’t go around showing crystal clear video in TV ads as an example of YouTube and then substitute it with that crap! That’s clear bait and switch as well as misrepresentation and outright fraud.

Apple, our troops in Iraq have an expression for the tsunami that’s heading your way: Embrace the Suck.

This entry was posted on Wednesday, August 27th, 2008 at 8:57 pm and is filed under Uncategorized. You can follow any responses to this entry through the RSS 2.0 feed. You can leave a response, or trackback from your own site.